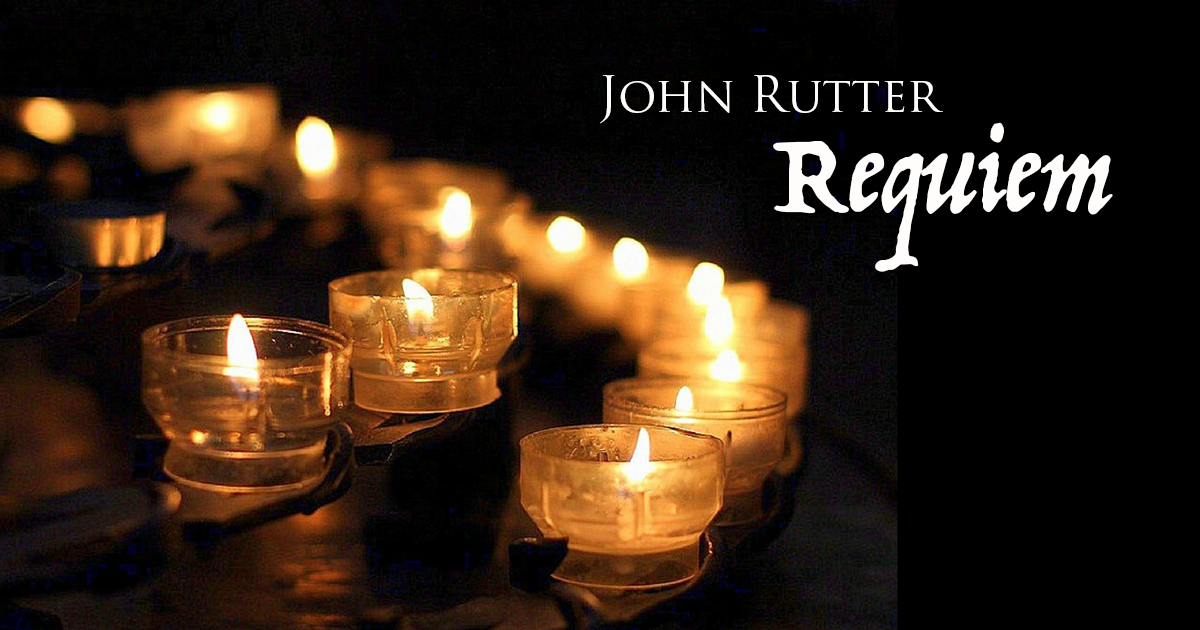 Choral Eucharist for the Commemoration of All Faithful Departed

During this season of All Souls, all are invited for a solemn memorial Eucharist, at which we will remember and celebrate the lives of those who have gone before us to the Kingdom of Heaven.  The complete Requiem Mass setting by John Rutter, with instrumental accompaniment, will be offered in the context of the liturgy. The Rev. Eric Hungerford, Celebrant The Rev. Josiah Daniels, Deacon Dr. Andrew Kotylo, Director of Music and Organist Andrea Boudra Kotylo, Assisting Organist The Adult Choir of St. Paul’s Episcopal Church Sophia Santiago and Diana Whitener, soprano soloists Elivi Varga, flute Marde Meek, oboe Cheryl Everill, cello Cheryl Cunningham, harp David Lu, timpani Erik Potteiger, glockenspiel The sanctuary will be illuminated with candles, and votive candles will be available for individuals to light. You are invited to submit the names of loved ones to be held in remembrance and listed in the service leaflet. Please click the link below to submit names(s) by Thursday November 3rd. Alternatively, you may use the clipboard in the narthex (church entry) or call the Parish Office: 215-242-2055.

This year’s service is offered in loving memory of our friend and parishioner ANN STOOKEY (2/2/1952 – 11/6/2012) in whose name The Ann Stookey Fund for Music at St. Paul’s was created.

Though he is perhaps best known for his carols and other short pieces, John Rutter also has a number of large-scale works for chorus and orchestra to his name. Most of these received their first performances in the United States, where Rutter is a frequent visitor, writing regularly for American choirs and conducting performances of his own music. The Requiem, completed in 1985, does not adhere strictly to the conventional Catholic liturgy, but combines texts from the Requiem Mass and the Book of Common Prayer. This is by no means unusual; Fauré, Brahms and Duruflé all followed their own individual preferences when selecting appropriate verses to set. The first movement comprises the Requiem Aeternam and Kyrie Eleison. This is followed by a setting of Psalm 130, ‘Out of the deep have I called unto thee O Lord’ which begins darkly with an unaccompanied cello solo in C minor, later giving way to a more positive C major at the words ‘for with the Lord there is mercy, and with him is plenteous redemption’. As with the Requiems of both Fauré and Duruflé, the Pie Jesu focuses on the soprano soloist, though in this case with the addition of a subdued choral commentary. The Sanctus and Benedictus are both followed by an exhilarating Hosanna. In the Agnus Dei the Latin text alternates with verses from the Burial Sentences, taken from the 1662 Book of Common Prayer. At this point Rutter inserts his superb setting of the 23rd Psalm, notable for its plaintive oboe solo, delicate orchestration and sensitivity to the text. This exquisite and moving piece, though composed some seven years earlier for Mel Olson’s First United Methodist Church Choir in Omaha, was surely destined for this context, encapsulating as it does the work’s message of reassurance. The last movement opens with another verse from the Burial Service, sung by the soprano soloist, which leads seamlessly into the Lux Aeterna, finally returning to the opening Requiem Aeterna theme for the peaceful conclusion. The Requiem was first performed in its entirety on 13 October 1985 at the United Methodist Church, Dallas, Texas, conducted by the composer. Since then it has become a firm favourite with choirs and audiences the world over. Though it necessarily has its dark moments, Rutter’s Requiem is unmistakably optimistic in its message of hope and comfort, expressed through the beauty of the chosen texts and Rutter’s uplifting music. It is not entirely surprising that after the tragic events of 9/11 it was this setting of the Requiem that was the preferred choice of music at the many memorial services which followed across the USA. ©  John Bawden, M.Mus., University of Surrey, U.K. John Rutter Discusses His Requiem A collection of short YouTube videos in which Rutter talks about the inspiration and influences that guided his composition, and explains how each of the seven movements is structured.