Home > News > Messages from the Clergy > These magical garments

Episcopalians are steeped in traditions and symbolism. We have our seasonal colors and sacred objects and vestments that are brought out and displayed. Pascal candle, advent wreath, crosses, stoles, and chasubles -all highly symbolic and possess a kind of spiritual energy, simply because they are used in sacred ritual. We imbue them with something “other” that cannot be rationally explained away. When clergy are ordained, we usually are given gifts for family and friends to mark the occasion and when we wear them, there is a deep association with the people who helped us get to this point in our spiritual journeys.

I have been given many gifts from supporters and loved ones over the years that I associate with individuals. For example, my ordination white stole was made by Patsy Wilson, the sister of my first partner, Frank Wilson. 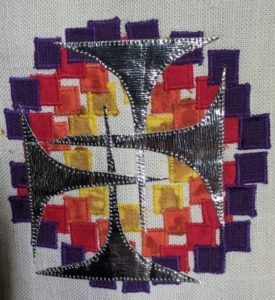 I designed a cross of nails with emanating light and colors coming from the white center that made up the center of the cross -symbolizing resurrection and light from the fusion of the four nails. The design and concept are an expression of resurrection faith that out of pain and suffering, we share in resurrection and victory through Jesus (symbolized in the four nails). Little did I know the pain and sacrifice Patsy, her husband Jonathan, Frank, and others would make so LGBT people would have a place in the church. Jonathan, as a straight ally, also experienced discrimination, and professional inhibition because of his inclusive belief in the gospel. That cross of nails symbolizes redemptive suffering, that others might live, belong, and practice ministry against all odds.

I have many stoles that have been given or designed with fabric from Africa, or hand woven and dyed stoles made in Ireland and arriving at important moments of despair when I was contemplating leaving the church completely because of all the homophobia I encountered over 40 years. These items become “sacramental” because they possess some mystical quality, often associated with a story, a parish, an individual, a triumph over despair. 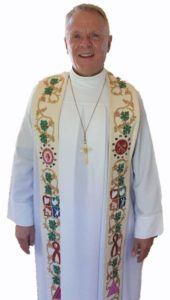 When I became Rector of St George’s Laguna Hills in California, the parish gave me a beautiful white chasuble and a matching stole that had all the symbols of shared ministries over the years. Beginning at the bottom, a golden threaded spiral, symbolizing the two parishes I served in Ireland, Derriaghy and Ballsbridge in Dublin. Then there was the pink triangle (used by Nazi Germany to mark homosexuals in the death camps) that became a symbol of LGBT liberation. Placed on my stole, It symbolizes our work in the LGBT community, our quest for equality and inclusion in the church and society. This began in Los Angeles following my exile from the Anglican church of Ireland (it was still illegal to the gay in Ireland until 1982!) Later, I would spend seven years working with the 76 countries where it was illegal to be gay, especially in Uganda. This began years of advocacy with the UN and World Bank to become more proactive global institutions to challenging governments for their blatant discrimination.

Next was the red ribbon associated with AIDS and working in California, the AIDS Service Center in Pasadena through All Saints Church and later would revisit the AIDS crisis 20 years later in Uganda while working with Bishop Christopher Senyonjo. The logo of Community Housing Services (CHS) in Pasadena is prominent to symbolize my working with the African American and Hispanic communities in Pasadena and Compton. We cared for 5,000 low-income children through early childhood education programs including Head Start and my long association with this wonderful organization helped me understand how non-profits were agents of the Holy Spirit. Many dedicated Christians found their calling and vocation through working in these stellar organizations. It was a privilege to get to know them and work alongside them and although CHS was not a religious organization, I am proud to wear their logo on my stole and many staff regarded me as their unofficial chaplain. Ministry has no bounds and our transformation of the bread and wine at the altar needs to be incarnated in the transformation of peoples lives and families through education, social and health services and for me, this Is ministry.

Above CHS’s logo are two circles of embroidered stones -the Stone’s Network was some early reconciliation work in Africa, mainly through the AIDS work but also between LGBT people and the church in Africa -still seen by the majority as an unwelcome and challenging interference. Inside each of the stone circles are two badges -both made in Chestnut Hill by Molly Ellis of Threadwell. One is the logo of the St. Paul’s Foundation for International Reconciliation (initially working with the LGBT community internationally and now focusses

on journalism in places where it is illegal to be gay. The second badge opposite it is my last parish north of New York city, St. Peter’s, Lithgow where I served for five years. The crossed keys of Peter, reminds me of the churches need to protect (lock/secure) and to be open (unlock that which is not yet accessible). The nape of the priests stole usually has a cross and St George’s Laguna Hills marked this portion of the design with the St George’s red cross.

There is one final symbol to be added to the stole – what might symbolize my last parish, St Paul’s Chestnut Hill? The stole is already full of embroidery and has intricate scrolls and leaves that tie all these symbols together, like a vine. One day I was rooting around in Fr. Cliff’s old desk drawer and found a (two-inch square) 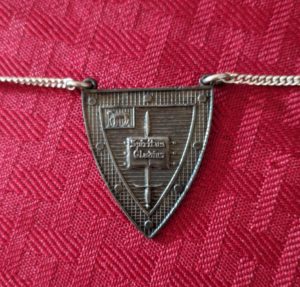 medallion with the St. Paul’s logo on it. It was probably a medal associated with an acolyte of junior choir member with the name Ripley Hastingson the back. I asked Ruth Desiderio, our Rector’s Warden, if I could have it to make one final addition to my stole -as a simple clasp across the front to hold the stole in place. Ruth agreed and thought it very appropriate. So, on Sunday at 11 a.m. when I remove the green vestments -the stole and chasuble worn by so many faithful priests here over the years, I will place them on the altar at the conclusion of my time with you as Interim Rector. They are not the priest’s vestments alone; these are everyone’s vestments and as my white stole symbolizes. In one garment, we show the organic and interconnected nature of priesthood where we are all engaged in this work TOGETHER. A priest never works in isolation, and we stand at these altars at the invitation of others and on the shoulders of others. When I put on those sacred magical clothes, we are all engaged in a sacred dance and a timeless moment where heaven and earth become one and we are fed and nurtured by the grace and holy food of God’s holy and grace-filled people. I have been so blest to have so many great and generous people in my life who believed in me and encouraged me to do the work that needed to be done -so each symbol is a story, and a story that needs its own reflection and discernment.

Next week, as I begin my first year of retirement, I will be thinking more deeply about the rich and deep relationships that each of these symbols represent. I hope to spend that first-year writing about and telling part of that story and reaching out to those individuals and institutions that shaped me and were shaped by me. There is an LGBT archive at the University of Southern California (USC) who have expressed interest in archiving my files and records that span 40 years of changing religious and cultural norms. The Irish National Museum in Dublin is also interested in this story and will be recording part of my personal story on August 17th as part of an LGBT Irish national archive. These are all positive affirmations for all of us who share in these ministries and causes. I am looking forward to a year of reflection and reconnection as the quilt of my life’s work is sewn together. The white stole I will be re-given on Sunday as I leave the St Paul’s altar, means more to me than words can express. It will be complete, and I will wear the St. Paul’s badge over my heart, every time I will wear that magical garment.

Thank you all for your love and encouragement. We managed to keep the ship watertight, agile and with the right turn of the rudder, your sails have caught the wind of the Spirit. Confident this is the direction God wants us to move towards, I feel excited for St Paul’s and for Eric as your new Rector. His journey and story will now become a part of a larger story and it will be exciting to see how this manifests itself, though vestments, stoles and magical clothing that point us to another light and another horizon.

I love the T. S. Eliot reference to this mystery:

“Our gaze is submarine, our eyes look upward
And see the light that fractures through unquiet water.
We see the light but see not whence it comes.”

May God continue to bless you all as we make our way, rejoicing in the power of the Spirit.

« Last call for any items to keep! Albert: Farewell and Godspeed »

Messages from the Clergy