The Most Reverend Frank Griswold joins us for a chat 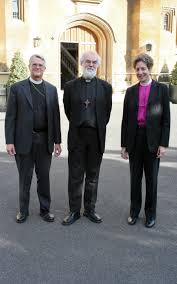 I first met Frank Griswold at St. Paul’s Cathedral in London in June 2007, at the ordination to the diaconate of a mutual friend – James Rosenthal. Jim was the head of the Anglican Communion Communications Office. Jim was a great help to the African Church in the 1990’s dealing with HIV and we often worked together. He ended up serving in a parish in London and Frank came to his ordination in that splendid London cathedral.

“Jim became a close friend and much trusted colleague when I was bishop of Chicago. His passion was to make connections between congregations, the bishop and the larger realities of the Anglican Communion and the world,” Griswold told Episcopal News Service. “Though at the time he was not ordained, I know of no one who better embodies the servant ministry of a deacon.”

As Presiding Bishop during some very tumultuous years, I always admired Frank’s courage and sense of servant ministry, and how he worked tirelessly to present a way the church could work together on difficult issues and move forward. It was a privilege to finally meet him and thank him for his ministry during those challenging years.

I saw him again two years ago when he assisted at Bishop Fred Borsch’s funeral at St Martin’s in the Field. Fred was my bishop in Los Angeles. Fred’s son and family were members of my congregation in New York, so Fred and Barbara Borsch were regular visitors to Millbrook and lived in Chestnut Hill, where Fred taught at the local Lutheran seminary. Fred and Frank represented an important voice of inclusion and advocacy within mainstream Christian denominations that came under heavy fire from more conservative Episcopalian and evangelical circles. They kept the table and church open when many wanted to shut down any engagement and attempt to shove a particular biblical interpretation down our throats. The bible was weaponized once again and people like Frank Griswold and Fred Borsch retained a stability in orthodoxy that appreciated sound biblical interpretation and what a welcoming Episcopal church looked like. They had their critics and their own battles to fight, but we are a better church because we had leaders like them defending the faith.

Today, Frank Griswold is retired (he prefers to call it “pensioned”) and is busier than ever giving retreats around the world in places like Cuba or Israel. His experience as a priest (3 parishes in Pennsylvania including St. Martin’s) Bishop of Chicago and Presiding Bishop from 1992-98 has given Frank a unique perspective on the world. He Co-chaired the Anglican Roman Catholic Commission for many years and has much to say about the progress we are making as churches in dialogue and looking for shared ministries.

We tried to get him to preach last year for St. Paul’s Day but he was otherwise engaged ..in the Holy Land. So, having an opportunity to meet and share his life and experience is a great joy as I get to know him and his wife Phoebe. Phoebe chairs the Diocesan Global Mission Commission, and they are both enjoying being back home (where they began!) Frank talks about meeting Phoebe at a local baptism and the rest is history. Please save the date for Sunday February 7th at 11 a.m. to watch the latest Clergy Conversations with the Most Reverend Frank Griswold and join us for a Q and A following on ZOOM. He talks about many issues including reconciliation in our nation and even comments on our Rector Search!

Messages from the Clergy