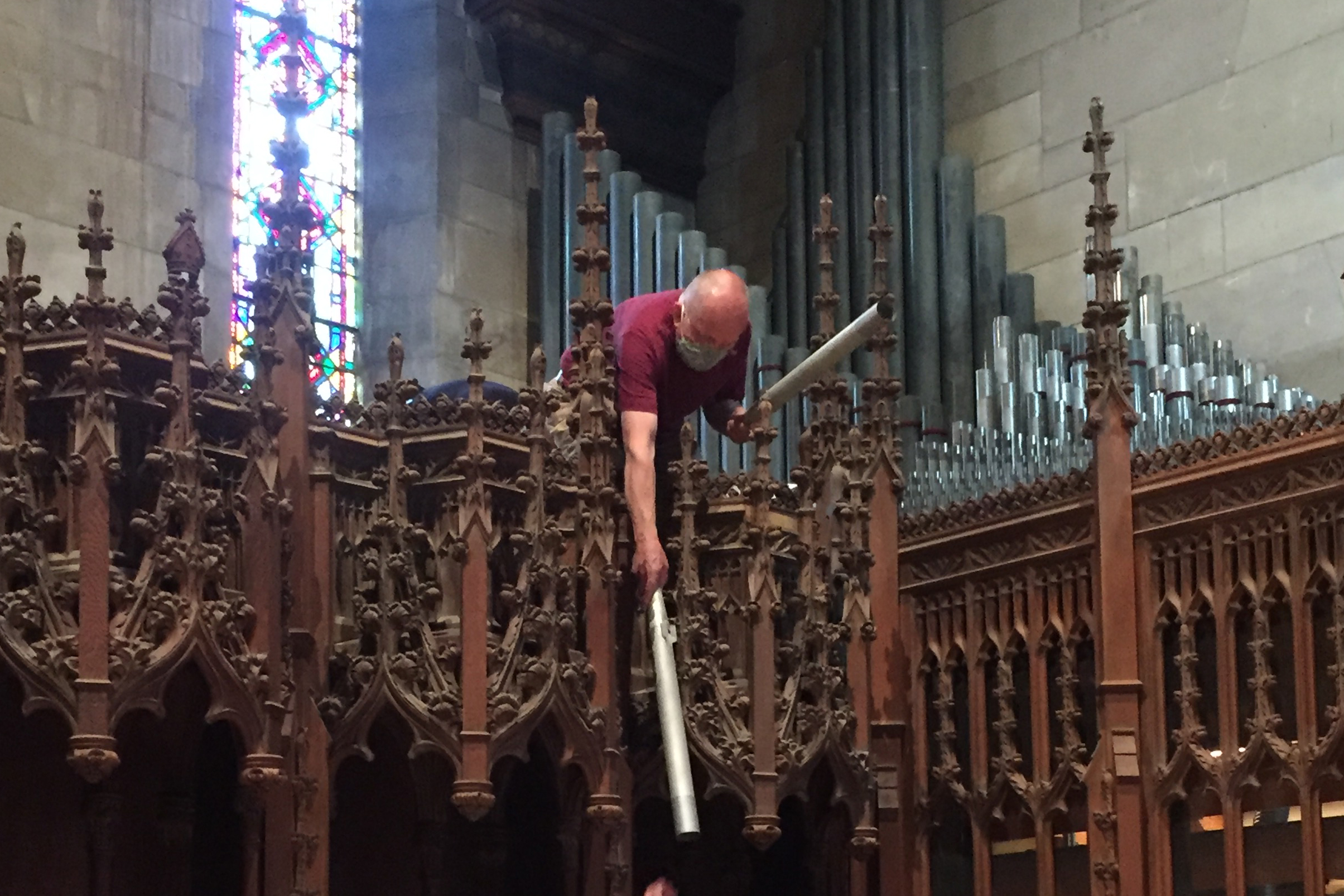 After five years of research and planning, and thanks to a wonderfully generous benefactor who provided a gift for the purpose, a major project to clean and restore Saint Paul’s noteworthy pipe organ got underway on June 11, 2020. About three-quarters of the instrument’s 6357 pipes are being removed to Cambridgeport, Vermont, where organ builder Russell & Co. will oversee the highly specialized work of restoring them to a “like new” condition. Not to be outdone by COVID restrictions that could have delayed the removal operation as originally planned, Stephen Russell and his team are conveying the pipes in their van, making several separate weekly trips to Philadelphia to bring the pipes to their shop.

The pipes are removed rank by rank, carefully ordered, and packed securely in wooden boxes for transportation. The pipes located on the east wall and above the choir stalls must be handed over the decorative wooden carvings, one by one, or by the bucketful, down to someone waiting to receive them. It’s tiring and dusty work. A final step to dismantle and transport the remaining large components of the organ will be undertaken by a professional firm, completing this preliminary stage of the project by mid-July.

The handsome and unique architecture of organ pipes that graces the east wall of the church on either side of the altar reredos will be gone for the time being. What of the organ will remain, while the restoration of such a large portion of the instrument takes place? The pipes that reside above the wooden ceiling of the church, as well as the digital components that we are accustomed to hearing sound from the gallery, will stay in place, as will the organ console in the chancel. At some point this fall, after in-person worship is re-established, temporary digital stops will be added in the chancel to provide the most important missing “voices” until such time as their pipe counterparts are reinstalled, sometime within the next 18-24 months. Advantage will be taken of the delicate pipes’ absence to renovate, rewire, and reorganize the spaces which they normally occupy, work that will be coordinated closely with the other sanctuary renovations being planned under the Capital Campaign so as to minimize cost and disruption.

Sign up for the Music News to receive future email updates on this project.

Read more about the Organ at Saint Paul’s.