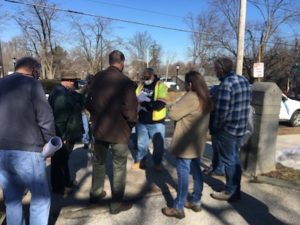 These pictures might not look like much more than people meeting on the street, but it’s actually a significant milestone in our construction.  These photos are from a kickoff meeting on Wednesday 03 March with the Philadelphia Water Department and representatives from the streets department to review the sewer construction.   That marks the official beginning of construction.

We are on our way.

Over the next couple of weeks final materials will be procured for the sewer work.   There will be no disruptions during this period and not much to see. 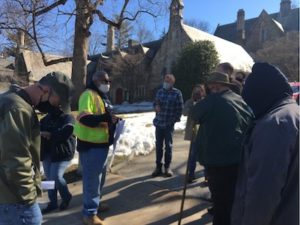 During the weeks of 22 and 29 April there will be some exploratory work going on in the street and on campus.  This will require occasional disruption of traffic but shouldn’t require any significant street closures.

The weeks after Easter starting approximately 05 April will see major disruption to Chestnut Hill Avenue.  The plan is to complete all work in the street in two to three weeks.  This entails excavation of E. Chestnut Hill Avenue from about the main entrance of OMC east about 100 feet.  At that point the excavation will move south onto 16 E Chestnut Hill Ave and then east almost to the alley between the church and 34 E. Chestnut Hill.  While the street will be open after construction moves out of the street, there will be construction equipment and sidewalk disruptions on the south side.  The plan is to have all sewer work complete by the end of May, weather and unforeseen site conditions permitting.

There is more work planned, and as contracts are awarded and schedules finalized the property committee will provide updates

Thank you again for the contributions and pledges that are making this work possible.

« Looking for the green leaves Interviews are underway »