Home > News > Music > The organ begins to come back

The organ begins to come back 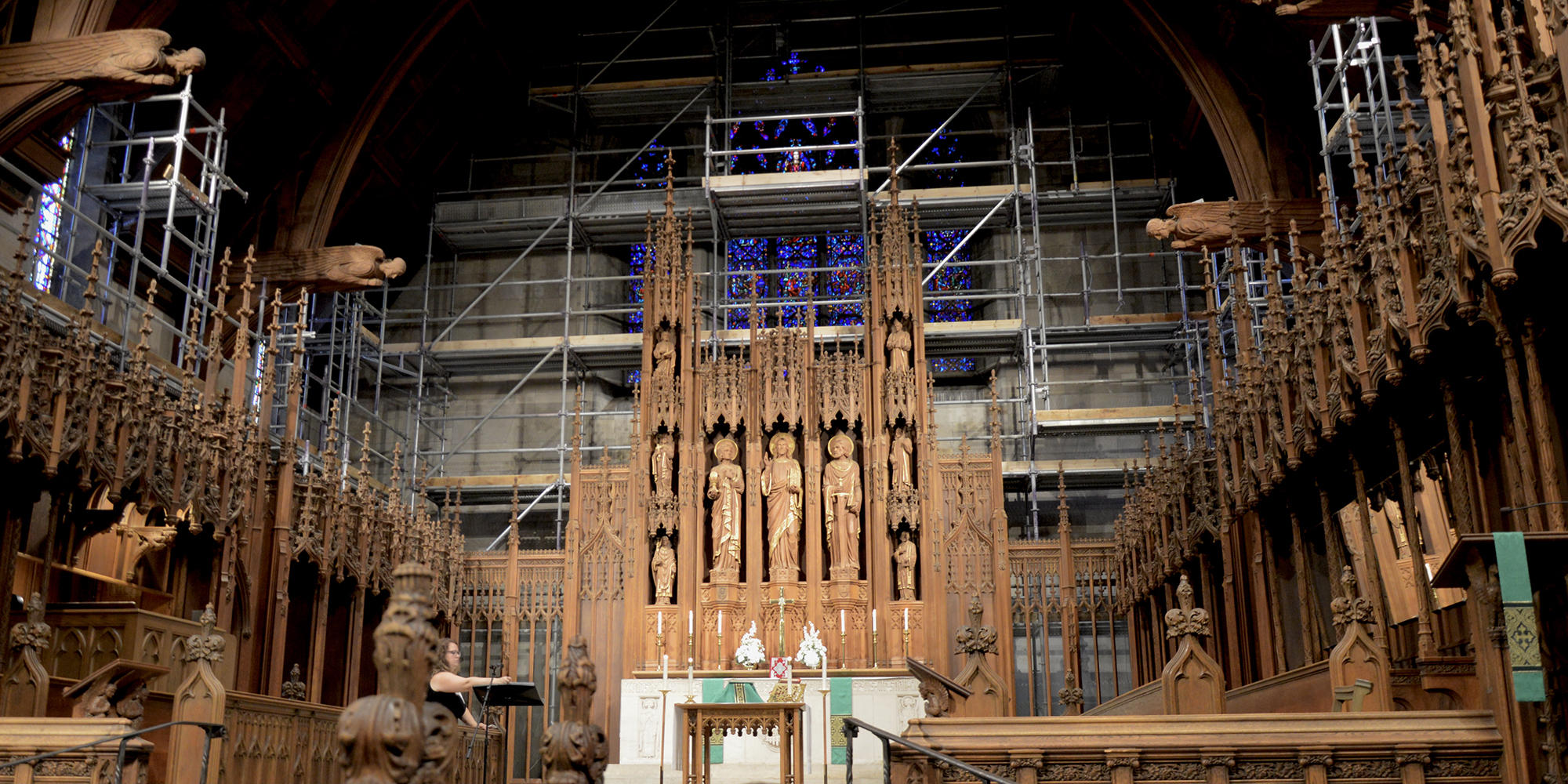 Scaffolding adorns the chancel, as cleaning of the wood and stone interior takes place alongside work to restore the ceiling organ.

Soaring summer temperatures did not prevent a small crew from organ builders Russell & Co. tackling the long and arduous job of reinstalling the pipes of St. Paul’s Aeolian-Skinner organ, most of which were removed more than a year ago for cleaning, repair, and renovation.  Company founder and master organ builder Stephen Russell, with his long-time employees Larry Nevin and Paul Elliott, spent a sweltering week working high up above the wooden chancel ceiling, where a good part of the organ resides out of sight of the congregation in the pews below.

Adequate preparation and planning of a project of this scope and complexity are fundamental to its success.  In the ceiling space, a partial redesign of the layout of the pipework is permitting additional ranks of pipes and other components to be installed there.  Critical upgrades and improvements currently underway in the ceiling space include leveling of the floor, a new electric supply that has brought 3-phase power to the whole church, adequate lighting, a modern heating and cooling system for climate control that is essential for good and true performance of the instrument, two new blowers, new and restored wind chests, replacement of the old metal wind lines with sturdy wooden lines that absorb acoustic energy (resonance), and various other components.

Periodic visits by the crew to St. Paul’s over the next months will continue this work.  Sharp ears will begin to detect changes in the tone and color of the organ sounds, as temporary digital stops are replaced with physical pipes.  Director of Music Andrew Kotylo is pleased with two new ranks of Orchestral Strings already in place in the Solo Division.  He says, “They have a keen, cutting tone that contrasts with the string stops the organ already has. You can use the two ranks together to produce an undulating effect.” 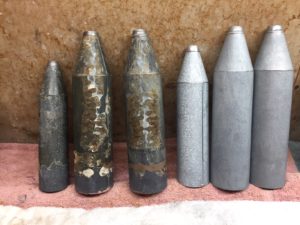 Meanwhile at the Russell organ shop in Cambridgeport, Vermont, work continues on preparation of the remaining pipes and other components that will be installed in stages at the front of the church and in the rear gallery.  This photo shows several Pedal Bombarde reed boots, before and after. The final stage of the project will be the completion and installation of a brand-new console that incorporates the highest quality materials and the latest technology. 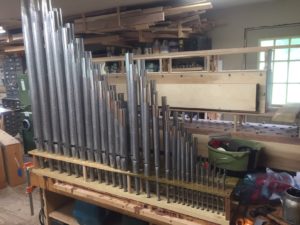 Harmonic Flute 4′ pipes (formerly Chancel Swell organ) set up for “racking” on new toeboards. Racking is the process of precisely fitting the pipes to the toeboard so that they stand straight with just enough wiggle room to assure that the pipes won’t be crushed when the wood shrinks in the dry winter months. These pipes are going to the Nave organ and will be installed shortly.

To see other typical work in progress in the Russell organ shop, check out this gallery of photos and a short video (most photos not the St. Paul’s organ).

How have Covid-related restrictions impacted progress on this project in the last year, and looking ahead?  Significantly, according to Stephen Russell. They have changed the order in which tasks could be completed, which has in turn affected the overall timeline. While early lockdown measures enabled good progress on work that could be completed in-house, many parts that had to be ordered from outside suppliers have been seriously delayed, notably the electronic components required for the computer system that controls the organ, which are notoriously subject to world-wide supply chain issues.  In addition, pandemic-related employment problems have contributed to shortages in an industry where highly specialized knowledge and combinations of skills are essential.  In handling these adversities, all of which lie outside the control of the organ builders, Russell suggests that a flexible and creative approach is key in adapting to this ‘new normal’.  Individual projects will be completed as materials become available and installed just as soon as is practicable.  He is optimistic that the end of the year will bring further progress in reinstallation that is both reassuringly visible in the church, and allows for a greater range of our organ’s unique tonal palette to be employed to support the beautiful music of the Christmas season.