This installment of property news doesn’t focus on what’s being accomplished anew.  Rather, this week we’ll look at the campus we live on and notice the evidence of earlier works that are still with us but perhaps only partially seen – if at all.

It’s well known that the parish hall started out as the original 1856 chapel.  What is less well known is that in the 1924 renovation the vaulted ceiling that we see today was installed and the roof was changed to a simple pitch.  The eyebrow vents seen in early photographs of the building were eliminated.  Or were they?

This view of the parish hall features the original granite walls and bell tower from 1856 with the new roof from 1924.  On the interior the new ceiling from 1924 conceals the rafters and framing of the original roof and eyebrows that are still in place above it. 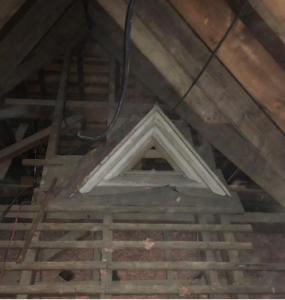 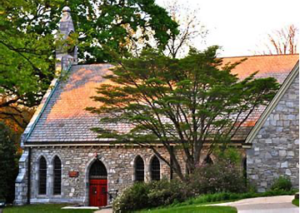 The rectory that we know today was not the first home for St. Paul’s clergy.  The drawings for the 1924 parish hall construction indicate that a house at 20 East Chestnut Hill Avenue was the rectory.  This structure was razed as part of the construction of the church, and 18 East Chestnut Hill Avenue became the rectory.  There is no evidence of the first property today except for a cistern that we uncovered during installation of the sewer – hidden from view, but proof of the structure’s existence. 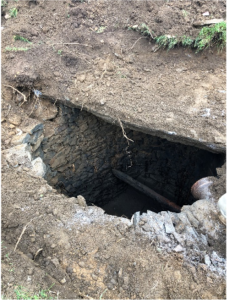 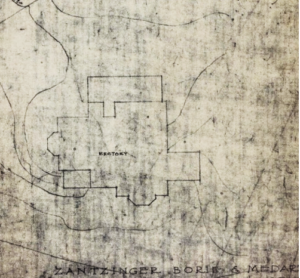 One of the most interesting of our architectural pentimenti is the stairwell at the back of the columbarium.  This entrance is mostly hidden by the vestibule from the sanctuary.  To my eye it has always appeared much larger and more monumental than necessary for a stair leading to a utility area.  The mystery was solved when we found a sketch in the archives that shows this area as an actual crypt. 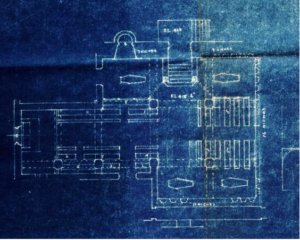 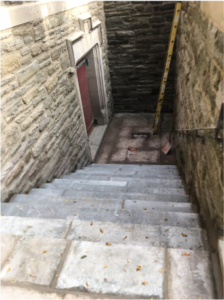 The crypt was never built, but the stairwell remains as evidence of the idea.  Perhaps our forebears thought better about the wisdom of transporting a coffin downstairs in the snow.

There are many other instances of rethinking, refining, and repurposing our buildings over time.  A portion of the foundation of the second church was incorporated into the foundation for the stage of the parish hall.  Windows and the font in the baptistry are from the second church.  The apartment was originally the church office.  The second floor of Dixon House was a badminton court.  There were plans for a sanctuary to seat one thousand that included a large bell tower.

Dreams are made and then refined and then remade again.  What pentimenti will we leave for parishioners in 2121 to riddle out?  How will we remake our buildings?

Work continues and is made possible by our pledges to the capital campaign.  Thank you to everyone who has fulfilled your pledge.  There is still about $130,000 outstanding.  Collecting these funds is vital to accomplishing as much work as possible.  If you are among those with an unfulfilled pledge, now is the time to bring accounts up to date.  Thank you to all who have made their contributions and those who continue to do so.