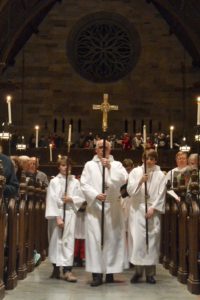 Eucharist, also called Holy Communion or Lord’s Supper, in Christianity, ritual commemoration of Jesus’ Last Supper with his disciples, at which (according to tradition) he gave them bread with the words, “This is my body,” and wine with the words, “This is my blood.” The story of the institution of the Eucharist by Jesus on the night before his Crucifixion is reported in four books of the New Testament (Matthew 26:26–28; Mark 14:22–24; Luke 22:17–20; and I Corinthians 11:23–25). The letters of the Apostle Paul and the Acts of the Apostles in the New Testament demonstrate that early Christians believed that this institution included a mandate to continue the celebration as an anticipation in this life of the joys of the banquet that was to come in the Kingdom of God. 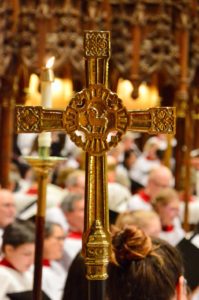 One of the principal Daily Offices, Evening Prayer has been the title for the Evening Office in Anglican worship since the 1552 revision of the Prayer Book. The BCP provides forms for Daily Evening Prayer in traditional and contemporary language (pp. 61, 115). Evening Prayer may begin with an opening sentence of scripture and with the confession of sin. The Invitatory may include the canticle Phos Hilaron, an ancient hymn praising Christ at the lighting of lamps at sunset. The office continues with a selection from the Psalter, readings from scripture followed by canticles (typically the Magnificat and Nunc dimittis), the Apostles’ Creed, the Lord’s Prayer, a set of suffrages, one or more collects, and the dismissal. One of the two suffrages is a version of the litany in the Evening Office of Eastern Orthodox churches with images of evening and death. Evening Prayer may also include an office hymn or anthem, the General Thanksgiving, a Prayer of St. Chrysostom, and a concluding sentence of scripture.