Reflections of the England Choir Trip

Sometimes a curious thing happens when you return from summer travels. Upon re-entry, your home can seem at once deeply familiar and yet a little bit strange. The dimensions of your house might be a little different than remembered, the cat can look a little bit bigger or smaller than expected, the smell of your own home at once welcoming and oddly noticeable. Part of the reason to step away for a while is for the pleasure of returning and seeing your everyday life from a fresh perspective. When we dwell in a place, it becomes so familiar that we can no longer truly see it. Or at least we often stop paying attention.

The St. Paul’s choir trip to England was an occasion for fellowship, for sharing beautiful music, for contributing our small bit to the vibrant Anglican choral tradition. But it was also an opportunity for us to step outside of our church home for a time. The choir sang in three English cathedrals: Exeter, St. Albans, and Southwark. Each was distinctive.

Exeter cathedral is a gleaming masterpiece of medieval gothic architecture. With the exception of a World War II bomb that destroyed a side chapel, history has largely been kind to this building. Today it is set in the middle of an expansive green, and the visitor enters to meet the “longest uninterrupted medieval stone vaulted ceiling in the world,” to quote the great sage Wikipedia. Like our own St. Paul’s, it looks like the interior has recently been scrubbed squeaky clean, as those stone fan vaults are a brilliant white. It takes your breath away. We sang our way through services surrounded by monuments, markers, and plaques commemorating the cathedral’s dead for the past thousand years. Although one of the cathedral priests used the word “terminal” to describe the general decline of the Church of England, from our point of view Exeter looked like a fantasy version of the living Church. Not only was the building beautiful and seemingly stable and eternal, an Evensong honoring a departing bishop brought in a full congregation that sang hymns with gusto.

In St. Albans, about an hour north of London, we encountered a cathedral that was in many ways the opposite of Exeter. History was not kind to this place. Early on it was sacked by Danes and Vikings. In 1250 it was damaged by an earthquake. In 1323 much of the nave collapsed, bringing down the roof. At the Dissolution of the Monasteries under King Henry VIII the place was looted. The place decayed, and the Lady Chapel began to be used as a school. In the English Civil War of the seventeenth century it was used to house prisoners of war, who vandalized the church. In 1703 it was damaged in a big storm. In 1832 the wall of the nave collapsed again. There are centuries of records documenting efforts to raise funds to repair the roof, which was forever rotting. It would have been enough to make even our own implacable Mark Duckett lose hope. In the nineteenth century, as part of a larger cultural movement to restore church architecture, the cathedral was rebuilt, the work largely funded by a generous if egomaniacal and cranky aristocrat. The result of this storied history is an architectural mess, a hodge-podge of styles, periods, and materials: a Mr. Potato Head church. It is—dare I say it—ugly.

And yet: if Exeter cathedral is a monument to human artistry, genius, and cooperation, a brilliant testimony to not only engineering but to a conception of the divine, St. Albans is a stubborn witness to endurance and hope. Its scars and patchwork tell the (repeating) story of human failure and resilience. It might not be pretty, but the church is still there—and not just standing, but still going strong.

Southwark Cathedral in London was built at a time when the south side of the river was the wrong side of the tracks, so to speak: the church was surrounded for centuries by brothels, prisons, playhouses, and places of blood sports like cock-fighting and bear-baiting. The cathedral gazes, perhaps with some envy, across the River Thames at Christopher Wren’s brilliant St. Paul’s. Architecturally speaking, Southwark lands somewhere between Exeter and St. Albans—it too had a legacy of ups and downs, but now has been restored in a way that harmoniously integrates its many eras. What struck me most, though, was not an architectural element but a lone fig tree planted next to the church. Although the tree looks ancient, it was planted after the 9/11 attacks, a gesture of transatlantic sympathy, friendship, and support. 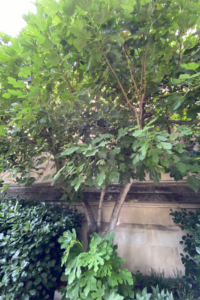 Even after spending long days of rehearsals and services in these imposing stone bulwarks, it is that fig tree that stands out in my mind. The fig tree is the stuff of parable, of course, because it can look so completely dead and then spring back into life. Actually, it cycles through periods of decline and rebirth. As human beings, and as Christians, we live through these cycles, cycles that sometimes endure so long we can’t even perceive that we are inside of them. This means that when we build and repair, we are often doing it not for ourselves but for others in the future whom we will never know. Interestingly, the first reading for the Choral Eucharist at Southwark was from Ecclesiastes, about overcoming resentment that “sometimes one who has toiled with wisdom and knowledge and skill must leave all to be enjoyed by another who did not toil for it” (2:21).

Returning home was an occasion to see our St. Paul’s in a new light and a larger context. Insofar as the choir trip was also a pilgrimage, it was a jarring re-orientation of historical perspective. We are part of a past that reaches back for millennia, and hopefully part of a church future that will endure for centuries to come. Our own church building, itself modeled after a medieval English church, is coming to the end of a period of repair and restoration. But we are still in the midst of a period of congregational rebuilding, renewal, and regeneration in the wake of a time of plague. Decline and rebirth are built into the very fabric of our buildings, our theology, and our living faith.